Wading into battle half-cocked may have been enough to conquer universes back in your gam-gam’s day – what wasn’t? But on Nexus, EVERY raid encounter will demand the utmost in herculean timing, split-second preparation, and scholarly strength! Will you have what it takes to kick Nexus’s toughest denizens in their monstrously misshapen junk or will they be picking their teeth with your femur come nightfall? Either way, you win!

Raids are available in 20-man editions. Raids are not required in order to complete the end-game Elder story; however, additional Elder lore will be available in the raids. Incentive for completing the raids will be the difficulty level and resulting rewards.

Once you hit max level, you’ll be able to experience firsthand all that raids has to offer, including challenging bosses and environments, replayability, and the sweetest of loot. Experience the most epic content on planet Nexus, with dynamically changing environments and boss mechanics. 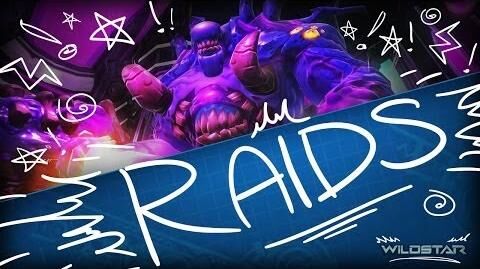 Nexus’s raid bosses hate uninvited guests and they’ve come up with numerous ways to deter solicitors. From relocating traps and watchdogs with a healthy appetite for butts to casually reconfiguring the entire layouts of their condos. Be prepared to withstand all types of natural “sunders” or you’ll be in a world of pain…literally!

Sure you’ve done the impossible: cleansed the area, killed the bosses, looted the loot, and killed the things. But if you wanted a static universe, you came to the wrong one! On Nexus, enemies learn from your pesky visits. Be prepared for tectonic shifts from one week to the next, with unique events and bosses available at variable times. Because the only thing better than accomplishing the impossible is doing it repeatedly.

Nexus’s raid bosses are more than just oversized jerks that take longer to die, they’re oversized jerks with backstories, hopes and dreams, and legions of specially bred followers fiercely devoted to their cause (which is usually killing you). Defeating them will require literally every shred of skill you possess, because your opponents are not only up to speed on advanced battle tactics, they’ve evolved tons of ways to counter them.

After defeating Nexus’s toughest delegators, don’t forget their putrefying uber-corpses are loaded with desirable accessories. From epic armor sets, uniquely powerful runes and elderly gems in record numbers, to artifact weapons of incomparable majesty. The goodies you’ll find on these deceased demi-stiffs will more than justify every death and bead of perspiration!

The forces of corruption nestled in Isigrol grow stronger, infiltrating the secret Eldan facility known as the Genetic Archives, a massive repository for the eugenic data of all organisms across Nexus!

Answer the Caretaker’s desperate plea to access the deepest recesses of the Nexus Project and jack into the Datascape—the virtual world where the myriad shards of the Caretaker’s fractured personality reside and have devolved into capering aspects of sadistic madness.