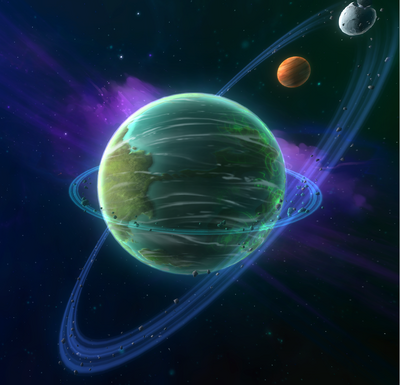 Nexus is the legendary planet of the Eldan--a powerful, technologically-advanced race that mysteriously disappeared from the galaxy more than a thousand years ago. Located in the unmapped regions of space, Nexus has been sought by archaeologists, adventurers and treasure hunters for centuries--and its recent discovery has ignited a mad rush across the galaxy to uncover its many secrets.

The Dominion, a powerful galactic empire that was established by the Eldan themselves, claim to be the rightful owners of Nexus and believe the discovery of planet Nexus represents the fulfillment of an ancient destiny. Because of this, the Dominion have declared war against any hostile race that threatens to stand in their way, including the Exiles who originally discovered the planet's location. Caught in the middle of this intensifying conflict is a chaotic and vibrant mix of different races from the furthest corners of the galaxy, including hostile alien races, bloodthirsty space pirates, and greedy intergalactic corporations.

The locales of Nexus

Nexus itself is wild and unsettled, with an endless variety of dangerous frontiers just waiting to be explored. Crumbling Eldan ruins lie hidden within majestic forests, towering mountains, and murky swamps, containing arcane magic and ancient technology of unimaginable power. The rusting wrecks of giant robots lie half-buried in shifting desert sands, and strange and deadly alien creatures prowl in the shadows of extraordinary monolithic machines. And hidden among all of these wonders are the dark secrets of the Eldan themselves, and the answers to why they disappeared from planet Nexus so long ago.

The Exiles were the first of the galaxy's two major warring factions to discover the planet Nexus, and took advantage of this opportunity to lay claim to many of the choicest mining and farming territories on the planet. The Exiles have laid claim to the icy Northern Wilds, the lush, verdant Everstar Grove (named for the Aurin Queen Myala Everstar), the mineral-rich valley of Algoroc, the forests of Celestion, and war-torn Galeras.

It is in Galeras that the Exiles founded their planetary capital, Thayd - a city built amid huge Osun ruins dating from ancient times - which has been under assault ever since the Dominion arrived in orbit.

The mighty Dominion did not discover Nexus directly, but once agents of the Imperial Corps of Intelligence (ICI) discovered the Exiles had found the fabled Eldan homeworld, they immediately set out to lay claim to the planet they see as their legacy. Remote as Nexus is, the Dominion was unable to send the majority of their fleet, but what forces they have sent there have easily taken control of wide swaths of the planet - and they continue to battle the Exiles in the contested regions of the planet. The Dominion is ready to take firm control of the Crimson Isle region, and have already established themselves as rulers of Levian Bay. The sun-scorched grasslands of Deradune provide ample prey for the Draken hunters who dominate that region, while the farmlands of nearby Auroria provide food and sustenance for the brave men and women of the Dominion war effort. They also rule supreme over the province of Ellevar where Eldan technology points to substantial experimentation sometime in the distant past.

Many regions of Nexus are either too wild or too hotly contested for either the Dominion or the Exiles to claim total control. Areas such as Wilderrun, Whitevale, Farside, and Malgrave are home to numerous settlements and military outposts belonging to both sides, but outside these relative safe zones these territories are still more or less up for grabs - despite what Dominion propagandists or Exile rabble-rousers may claim.

The Art of WildStar The World of Nexus