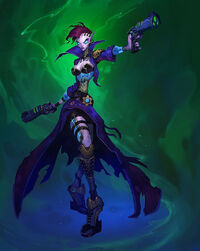 Cursed with a degenerative disease after delving into the forbidden secrets of alchemy, the Mordesh have come to Nexus to find a cure.

The Mordesh used to be one of the most technologically advanced and culturally significant civilizations in the galaxy, particularly known for their alchemists who had long since solved the transmutation of lead into gold and moved onto bigger and more ambitious projects. They had rose so high that the Dominion was all too eager to invite them into their ranks, and they only too happy to take the offer.

Of their best and brightest was a young scientist named Victor Lazarin. Brilliant and ambitious, Lazarin had made a number of accomplishments in his field, earning him the respect and adoration of his peers. Tragedy befell him when his lovely wife Mina died during childbirth, leaving him with his daughter, Lucy.

Depressed and distraught, Lazarin retreated deep into the bowels of his laboratory to create his magnum opus and greatest failure: the Everlife Elixir, an actual potion of eternal life.

Initial tests proved astoundingly positive--the moment Victor imbibed his serum, hair and teeth lost regrew, ills disappeared, and his skin returned to a healthy, youthful sheen. So pleased was he that he immediately shared his great discovery with the rest of Grismara, who were only too eager to follow.

It took only a few months to learn that not all was as it seemed. The serum worked too well, granting immortality to the diseases of Grismara as well. They mutated and grew, until they finally become the nightmarish horror that is the Contagion, an illness that causes the body and mind of the victim to rot, turning them into mindless cannibals christened the Ravenous.

The Dominion quickly abandoned the Mordesh, establishing a planet wide quarantine that turned their home into a prison. Many struggled through the anarchy to beg for help, only to be gunned down in cold blood.

Horrified, Victor Lazarin quickly set to a cure for his race. With limited resources, little time, and 80% of Grismara already dead or Ravenous, he had to make do with Vitalus serum, a chemical that temporarily keeps the Contagion at bay and prevents further rotting.

After nearly causing the extinction of his own race, and abandoned by the Dominion, Victor Lazarin and others of his race, with the help of Avra Darkos, joined the Exiles and traveled with them to Nexus. Lazarin hopes to find the answer he seeks to save his people and redeem his place among them.

When Mordeshes ran out of their vitalus serum, they transformed into flesh eating Ravenous. The only solution to the Ravenous is to kill them and dispose of their bodies to prevent contamination on living species with Mortalis Acid. Each Mordesh communities, or Enclave, have a team of reapers to deal with the possible Ravenous outbreak. One of the significant visual sign of Ravenous Mordesh is their red skin and extremely light blue hair, which many of Ravenous mobs also have bandages that was possibly used to seal their vitalus tanks. They also became hungry for flesh when they lost their minds from the effects of Contagion.