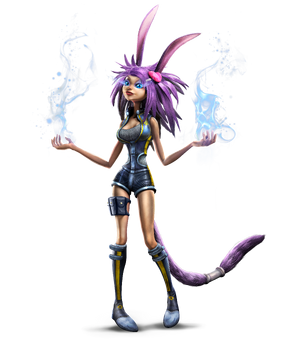 WildStar Online infuses amazing stylized art with the latest technology to create a stunning visual experience. Set on a wondrous alien world, WildStar delivers a wild and mysterious adventure among the ruins of an advanced civilization - allowing you to play the way you want to play while experiencing an unprecedented level of exploration and discovery!

We understand, though, that some people might be coming into the site and the game without quite knowing what they're getting into. This might be someone's first MMO (massively multiplayer online game). Maybe they're familiar with only one game in particular, or maybe they've heard about WildStar through friends or the media. To that end we've cobbled together a brief starter guide to prime new players. This goes through the initial character creation steps and includes notes on what to expect from notes and combat, as well as some other tidbits for further exploration, such as links to our Level Progression Guide and Instant Expert. 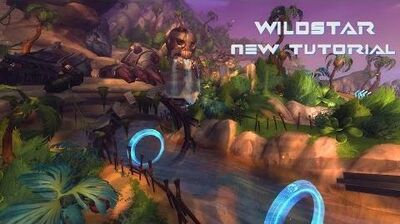 Players creating a new character will need to select their preferred experience. Prior to the Free to Play model, all new characters shared a similar experience prior to arrival on Nexus. Now there are two choices: 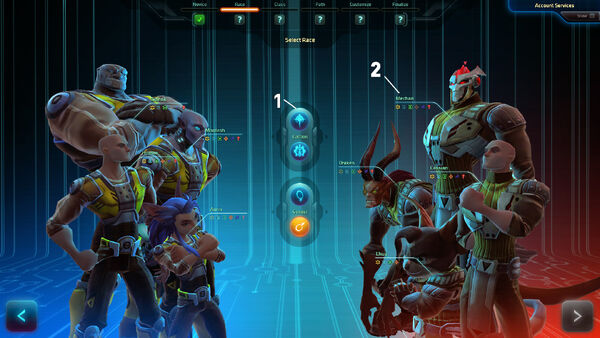 The first source of confusion might be the character creation process itself. As far as it goes, there's not too many surprises here if you're familiar to the whole MMO scene. The first two descriptions corresponds with a numbered section in the picture above:

1. Faction: players need to decide whether they'll be part of the 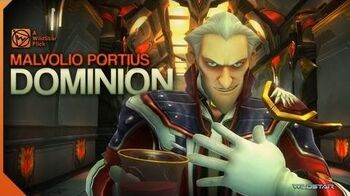 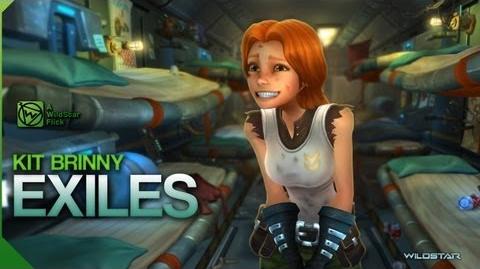 2. Race: each race is affiliated with one of two factions. When determining what race you may want to play, keep in mind what class you might also want to play; not all races can be all classes. Off to the right you'll find a description of what race you choose. 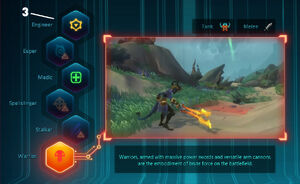 3. Class: choose from a variety of classes. This will determine what role you choose to play, as well as what attributes you'll need to keep an eye for when acquiring new gear. Not all classes can be played by all races, and each class utilizes a particular type of weapon. Off to the right you'll find a description of what class you choose. 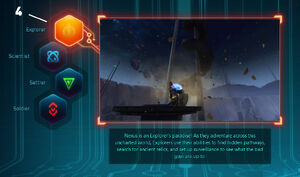 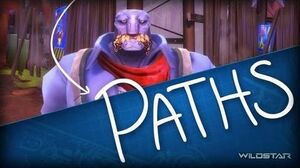 4. Path: there are a small amount of paths to choose from. The easiest way to think of this is a subclass. It isn't mandatory to level this up, but it does provide additional perks and resources with each rank, from titles to bags to path-specific items. Note that this is different than a tradeskill. Off to the right you'll find a description of what path you choose.

5. Customization: it's from this menu that you can truly make the character your own. You can either choose the "randomize" button at the top or go through each submenu to tweak things exactly how you want them. 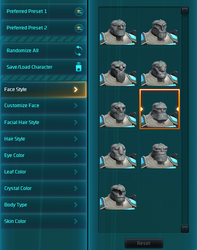 As you can see, each submenu selection opens up with a fly-out menu of options. You can see how each looks on your current model. In addition to those submenus in the picture, players may also alter their character's body type.

6. This is your character. It will change depending on what race, gender, and customizations you choose.

7. The last task before saving is to name your character. Both a First and Last Name will be required. One fun option is to use titles such as Captain, Chef or Professor as a first name. Also keep in mind that paths along with specific quests also reward titles , so there are some pretty fun combinations to be had.

There are other areas of note within the interface once you get past character creation, and taking a few moments to familiarize yourself will save a lot of frustration down the road: 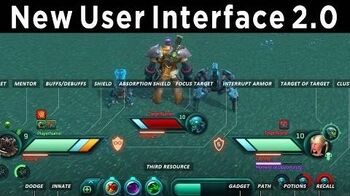 There are a number of quests scattered throughout Nexus. Once players save their character They will be transported to the starting area of their choice. For players who chose Novice, this is a holographic area where they will meet their 'instructor' who will allow the characters to advance once they have passed the appropriate combat and movement tests. These characters, along with anyone who chose the second option "New to WildStar will see a cutscene of being awakened on their arkship - Dominion players will be on the Destiny, while Exile players will be on the Gambler's Ruin. Players who complete the appropriate arkship quests and players who chose Veteran will continue their story on the planet's surface. Quests are usually given by NPCs (non-player characters) but can come from datachron calls or objects.

Your first quest will be directly in front of you.

: this generally will be seen above an NPC's head that has a quest to offer

: this generally will be seen above an NPC's head that you have a quest to turn in to

The majority of quests will be those everyone can access. The second most common will be missions for whatever path you have chosen.

For those times where you are confused as to where a quest objective is located, you can click on the objective of the quest on your screen (quests are tracked to the right). A white series of arrows will point you in the direction you need to go.

Traditionally MMOs have relied on selective targeting and tab-targeting. This means players would largely have to click on the target they wanted to attack, then use "Tab" to quickly switch between targets.

WildStar does not use this. Instead, they've designed abilities around what they call "telegraphs". An easy way to see this is to hover over each ability you have on the bottom of the screen. You'll see a transparent overlay appear on the ground in all directions and distances the ability will affect. Targets appearing in the lighter sections will receive the least amount of damage, while those in the darker sections will receive the most.

In this way, players may fight without relying on multiple clicks or tab-targeting; so long as an enemy is within the "telegraph" area, they will be struck. 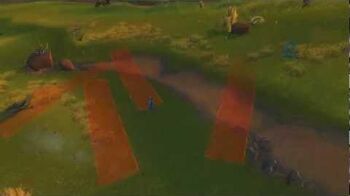 There are a host of zone maps that highlight all of the collectible elements of the game, including Datacubes, Journals, and Tales from the Fringe. Added to the mix are quest hubs, taxi locations, rare mobs for achievements, instances, and more!

Below are two examples of the maps - one for a major city and one for higher level characters. Links to all maps can be found on the zone guides page.

Hopefully this primer is a good start if you're jumping into MMOs for the first time or new to WildStar Online. Below we've compiled a list of links used through the article that lead to expanded information and videos, as well as other links you might find useful as you progress through the game.