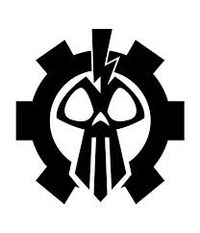 The Exiles are one of two playable factions in WildStar, and who share Thayd as their beginning capital city. The races in the Exiles include Exile Human, Aurin, Granok and Mordesh. See also Dominion.

For more than a thousand years, the humans of planet Cassus had ruled the greatest empire the galaxy had ever known. But as the Dominion's power grew, a number of unpopular policies were enacted that led to civil unrest. What started out as protests in the streets of Cassian cities soon became brutal crackdowns on all who opposed the new order.

When the Dominion military turned weapons on its own citizens, Serrick Brightland, a highly decorated admiral of the Cassian fleet, rebelled against his commanders. Commandeering his own warship, the Star of Dominus, Brightland led Cassian rebels on a series of unexpected, devastating attacks - leaving the Dominion fleet in shambles.

But the rebel admiral's early successes proved costly in lives and materiel. When the full strength of the Dominion military finally caught up to him, Brightland grimly surveyed the battlefield - then bravely set a course for the heart of the enemy fleet. Surprised by the suicide maneuver, the Dominion warships broke formation, and the other rebel starships were able to escape.

Against all odds, the Star of Dominus survived – but at a grave cost. Admiral Brightland sustained terrible injuries in the battle, and was placed into cryo-freeze in order to save his life. Rechristened The Gambler's Ruin, Brightland's vessel was converted to an arkship, and the rebels fled for their lives across the stars.

In the wake of the daring rescue mission which saved Queen Myala Everstar and most of the Aurin population of Arboria, the Exile Fleet found itself in dire straits. Many of its starships were sorely in need of repair after engaging the Dominion military, including the massive arkship Gambler's Ruin that served as the flagship for the aging, ramshackle fleet. Stores of food and water - always in short supply - were now stretched dangerously thin in order to support their new Aurin visitors, along with an increasing number of refugees that had escaped the Grismaran blockade. And although the Exiles had successfully escaped the Dominion after the events on Arboria, the empire had tripled their Seeker patrols in the backwater systems of the Fringe. If the fleet wasn't outfitted and operational within a few days, the Dominion would undoubtedly find them - and even with the support of the Granok free companies, they might not survive another attack.

As the hours passed and the engineers worked desperately to repair breached hulls and blasted engines, a growing sense of despair spread through the fleet. A hushed silence pervaded mess halls and crowded sleeping quarters, as if any sound might lead the Dominion Seekers to their hiding place. Huddled groups of families and friends gathered on observation decks, casting anxious glances into the silent starscape while quietly praying to their chosen gods. Many believed the situation hopeless. Even if the ships were repaired and provisions were found, it was only a matter of time before critical systems of the fleet's battered starships began to fail. What they needed was a new homeworld, a place to put down roots before they succumbed to death or destruction in the cold reaches of space.

And indeed, they might have suffered such a fate had it not been for a human named Dorian Walker. Obsessed with finding the legendary planet Nexus for years, Walker had always been considered a crackpot amongst his friends and peers. Just before the rescue mission on Arboria, he left the fleet in a desperate gamble to find the Eldan homeworld. After weeks of fruitless searching, just as the life support systems on his ship started to malfunction, Walker finally reached Nexus - and soon after making planetfall, he sent a joyous message to the Exiles that he had finally found them a new home.

News of Walker's discovery spread like wildfire through the fleet. Hopelessness and despair gave way to an elated anticipation of things to come. Glasses were raised, and worries forgotten. Salvation, it seemed, was at hand.

Within a few hours of the announcement, leaders from all of the races in the fleet met aboard the Gambler's Ruin to discuss what should happen next. Each shared a common bond, driven from their homeworlds in the wake of the Dominion's aggressive expansion, and Nexus represented a place of refuge where they could rebuild their shattered lives. Despite the miraculous news, they understood such a journey was going be extremely difficult. Aside from the unknown mysteries and dangers awaiting them on the planet, a thousand other challenges needed to be addressed and overcome if they were going to establish a community strong enough to survive.

Their discussions lasted for days, with spirited arguments about everything from merchants' rights to law enforcement to military service. Eventually, they hammered out the major tenets of an agreement that would come to be known as the Exile Accords. Signed by all of the leaders present, the Accords represented a commitment to building a free society on planet Nexus, and a promise they would stand united against anyone or anything who threatened their new home.

As the ink was drying on the Exile Accords, the engineers completed their repairs and the word was sent out to prepare the fleet for hyperjump. Provisions were stored, hatches were battened, and all non-essential crew were directed to cryo-pods for the long trip beyond the Fringe. As the hyperdrive of the Gambler's Ruin rumbled to life, the exhausted and hopeful Exiles closed their eyes and drifted quietly into the warm embrace of cryo-sleep - dreaming of the new lives awaiting them on Nexus.

300 years cessation from the Empire has bred out most every remnant of Dominion sophistication: the Exiles are not unlike American Southerners. They speak in friendly, casual dialect; value hard work and industry; and judge a man's worth by how much weight he can carry on his back.

Thanks to the limited resources available to a fleet of criminals wanted by the most powerful empire in the galaxy, Exiles have learned to make do with what they have, taking old technologies, scrapping them for parts, and refitting it for their purposes. Most Exile hazmat suits, for example, are older, obsolete models that have been retrofitted and modified to keep them updated; while they will never match Dominion hazmat suits in sheer technological advancements, many independent researchers prefer Exile technology as it is guaranteed to work and work well.

As there are few companies willing to sell work droids to criminals, the Exiles have been forced to create their own from spare parts and junked models. Those that are particularly skilled in the craft are called Botsmiths, able to turn random knick-knacks into a functioning robot, and even craft medical cybernetics to replace limbs lost to unfortunate accidents.