The Exile Humans originated from the planet Cassus. After a small group of rebels, led by Admiral Serrick Brightland escaped Dominion rule by leaving the planet, the rebels no longer considered themselves to be Cassians and left in search of a new home.

For more than a thousand years, the humans of planet Cassus had ruled the greatest empire the galaxy had ever known. But as the Dominion's power grew, a number of unpopular policies were enacted that led to civil unrest. What started out as protests in the streets of Cassian cities soon became brutal crackdowns on all who opposed the new order.

When the Dominion military turned weapons on its own citizens, Serrick Brightland, a highly decorated admiral of the Cassian fleet, rebelled against his commanders. Commandeering his own warship, the Star of Dominus, Brightland led Cassian rebels on a series of unexpected, devastating attacks - leaving the Dominion fleet in shambles.

But the rebel admiral's early successes proved costly in lives and material. When the full strength of the Dominion military finally caught up to him, Brightland grimly surveyed the battlefield - then bravely set a course for the heart of the enemy fleet. Surprised by the suicide maneuver, the Dominion warships broke formation, and the other rebel starships were able to escape.

Against all odds, the Star of Dominus survived – but at a grave cost. Admiral Brightland sustained terrible injuries in the battle, and was placed into cryo-freeze in order to save his life. Rechristened the Gambler's Ruin, Brightland's vessel was converted to an arkship, and the rebels fled for their lives across the stars.

The discovery of planet Nexus by the famed explorer Dorian Walker represented a new beginning for the humans – a chance to lay down roots before the critical life support systems of the centuries-old Gambler's Ruin completely failed. Serving as the heart and soul of the Exiles, they are now ready to make their final stand against the Dominion that once again threatens their home.

Chroniclers are historians who recorded history through either oral or written forms. In addition, they served as pillar of Exile communities since they officiate weddings and solve legal disputes. The chroniclers have Chronicler Houses, where they stored historical records and taught their apprentices on their field of work. They are respected during the Cassian Commonwealth and the early era of Dominion until Emperor Jarec's Vigilant Decree led to the destruction of Chronicler Houses, which many tried to defend these traditions. After the Brightland Rebellion , the Chroniclers became one of the important aspect of Exile humans' cultural aspects that remind of their origins and history. 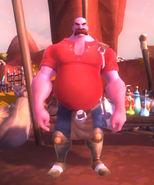 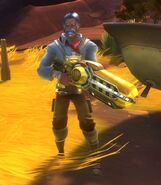 WildStar Who Are The Humans?-0